1798, CONGRESSIONAL BRAWLS BEGIN
While Congress was meeting in Philadelphia, Representative Matthew Lyon of Vermont spit tobacco juice into the eye of Representative Roger Griswold of Connecticut on the House floor. Griswold later retaliated by hitting Lyon with a cane. Lyon then began attacking Griswold with a pair of fireplace tongs. The House attempted to censure both members but the resolutions failed. The underlying conflict was a disagreement over President John Adams' military strategy. This is regarded as the first of many Congressional brawls. It quickly became satirized in the press and brought national attention to the Partisan divide in Congress. 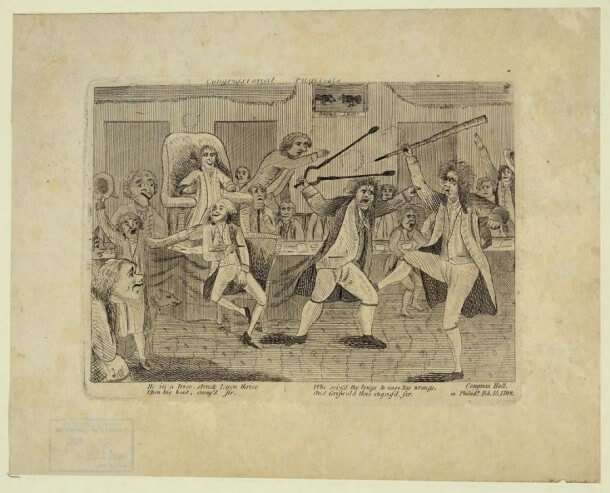 Photo from Library of Congress: Prints and Photographs Division

1815, JEFFERSON'S LIBRARY
After capturing Washington D.C. in 1814, the British burned the Capitol, destroying the Library of Congress and its 3,000 volume collection. Thomas Jefferson offered to sell his personal library in order to rebuild the Congressional collection. On this day in history,President James Madison approved an act of Congress appropriating $23,950 to purchase Thomas Jefferson's library of 6,487 volumes. An avid reader and book collector, Jefferson's library not only included over twice the number of volumes as had been destroyed, it expanded the scope of the library beyond its previous topics—law, economics, and history—to include a wide variety of subjects in several languages. Anticipating the objection that his collection might be too comprehensive, he argued, "I do not know that it contains any branch of science which Congress would wish to exclude from their collection; there is, in fact, no subject to which a Member of Congress may not have occasion to refer."

Today, Jefferson's personal collection is stored in the Rare Book and Special Collections Reading Room of the Library of Congress.